What is the Best Smartphone Tripod in 2022? [A Buyer’s Guide] Thanks to advancements in technology, smartphone cameras today can rival the most expensive digital cameras. However, holding your phone still can be a challenge when you take a pro-level picture or shoot a video. An overstretched arm can ruin even the most scenic of shoots. And that’s where a phone tripod steps in. A good smartphone tripod helps you set up the camera the way you want so that you can take the best shots possible. While there are several tripods for smartphones in the market, don’t waste your time (and money) on cheap ones. We have done thorough market research and recommend the below options. These smartphone tripods are so compact they can fold down to the size of a 500ml water bottle. Because of their small size, you can use them on a table’s top, bedroom’s side table, car’s dashboard, or anywhere else you want. Manfrotto has been in the tripod market for quite a while. Their models are famous for providing good quality and features at an affordable cost. The Pixi Mini tripod follows the same tradition. It’s a straightforward smartphone tripod stand that nails the basics without costing a bank.

It’s a two-part compact kit that comprises a Manfrotto’s universal clamp and PIXI mini tripod stand. The spring-loaded clamp is very basic, but it can accommodate smartphones up to 84 mm wide. That’s more than enough to hold big smartphones like Galaxy Note 10 securely.

The Jaws are grippy, and the clamp can be attached to the ball head on top of the stand. This makes tilting your phone up or down and taking low-angle shots an absolute breeze. What’s more, you can remove the clamp and attach your favorite lightweight camera to the ball head if you want.

Overall, the Manfrotto’s PIXI mini tripod kit makes handheld vlogging much more manageable, stable, and professional. However, the lack of features on the phone holder will irk long-time users. Oh boy, the Joby Gorillapod is one of the most uniquely designed tripod stands we have seen in a while. The arm-like supports on both sides make it look like a transformers action figure. With a design like this, you always wonder whether it’s really functional. But trust us when we say the Gorillapod is as practical as best smartphone cameras get.

In fact, this gorilla tripod goes a few steps further. Because of its double arms, you can mount a separate microphone or some LED lights to increase your work’s quality further. Moreover, the super-flexible legs ensure you can bend your smartphone around objects to get even more variety in your shots.

The Joby’s GripTight PRO Phone mount holds the entire package in place. It has a single locking do-it-all knob that secures your phone and quickly helps you switch between positions. However, you have to be extra careful when rotating the knob as it can accidentally drop your phone.

All in all, Joby GorillaPod Mobile Rig is one of the best multipurpose tripods that works like a charm despite an odd design. If you are a fan of water photography, Fotopro waterproof Phone tripod should be on top of your list. You can call it the MacGyver of Tripods. It’s lightweight, super flexible, and the legs are waterproof to give you peace of mind when working near water. Not to mention, you can use it for smartphones as well as smaller consumer-grade cameras.

What we really love about this model is the flexibility of its legs. You can attach it to a street sign, light post, fence, tree, flag pole, or just prop it on a statue. Similarly, you can use one lag to hang it somewhere and use the other two for support or all three to fit a corner. There are limitless possibilities when working with this phone tripod stand.

This small tripod even comes with a tiny Bluetooth remote. You can attach your phone and use it as a button to control video/pictures from afar.

Our only disappointment is that the smartphone attachment clip is plastic. You should be careful not to stress it when working with bigger smartphones. The good thing is, it’s spring-loaded. Therefore, it secures your phone in place in a number of different configurations. Furthermore, It comes with Joby’s feature-rich GripTight PRO Phone mount. With extensive height adjustment options and a quality build, the smartphone mount compliments the Telepod exceptionally well whether you are using it as a tripod or monopod.

The Joby tripod is a very well-featured smartphone holder with extra height. Its nifty telescoping central column extends the size to approximately 79 cm. But, balancing your phone when it’s high-up becomes a bit of a challenge because of the short legs.

As you would expect, it’s not as compact when packed. Other than this, the Joby GripTight PRO TelePod is sure to enhance your Youtubing skills in more than one way. CamKix Bluetooth Smartphone Stand is another great tripod for social gatherings or silly TikTok videos. It comes with a Bluetooth remote, a CR2032 3v flat battery, and a mini tripod adopter to give you the most bang for the so-called bucks.

The legs are sturdy and Bluetooth syncs up nicely with your smartphone from about 30 feet away (as per the manufacturer). Moreover, the adapter stretches to approximately 4 inches wide and is able to hold smartphones with ease. Thanks to two adapter attaching points, the grip is tight, and the phone fits well snug.

Furthermore, the ball swivel join holds the phone at different angles. It even has a lock to give you peace of mind that your phone won’t slip away while taking pictures or videos. Just be careful about the phone clamp. Its strings are really solid, and they can pinch your fingers.

Overall, if you want a tiny, no-nonsense, and affordable option, go for the CamKix Bluetooth smartphone tripod. Just because tripods are fairly simple and similar doesn’t mean you should spend your money on the first model that catches your eye. Below are the factors you should consider if you want to make the most of your smartphone tripod.

Check the tripod’s function, i.e., how does it fold up? If the legs fold up tight against one another, you can probably use the cell phone tripod as a gimble. Also, avoid selfie sticks that double as tripods unless it’s a very reputable brand like Joby. Usually, such tripods are not good at image stabilization.

How far can you extend the legs? Tripods with longer extendable legs are ideal for outdoor shots, while those with shorter legs come in handy indoors. If you are going for a long extended leg tripod, make sure the smartphone remains stable at maximum height. Still, other tripods come with flexible legs. You can bend them in different ways to suit your angles.

Don’t go for an iPhone tripod or phone tripod if it has no universal compatibility. With universal tripods, you can change the sides of the top mount to fit any handset size. Some others can work with devices like GoPro and digital cameras. However, they may require you to purchase the mount adopter. Choose one depending on your needs, as the price varies with each model.

Most tripods are plastic. They come in black color and lack good looks. If you are carrying the tripod a lot, think about investing in something a bit more aesthetically pleasing. Go for foam-padded legs, textured details, and different color combinations to differentiate yourself from the others. 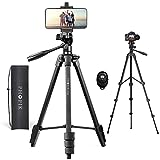 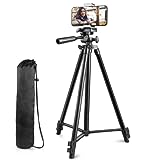 Tripods for camera phones help improve photography. They usually come with a spring-loaded design and a universal mount to support the android as well as iPhones. While there are several tripods available for smartphones, consider your everyday use along with the quality and versatility of the tripod for your perfect combination. Hopefully, the information provided in this list was helpful. Good luck!

What is the best smartphone tripod right now?

Manfrotto PIXI Mini Tripod is undoubtedly the best tripod at the moment due to its all-around utility.

What is the most affordable smartphone tripod right now?

The CamKix BT Smartphone stand tops our list when it comes to affordability.

What is the most flexible tripod stand right now?

The Joby GorillaPod stand is the most flexible smartphone stand today.

What is the best Bluetooth tripod right now?

Bluetooth smartphone tripods by Manfrotto, Benro, and CamKix are all very good in terms of connectivity.

What is the best iPhone tripod?

Any model by Manfrotto and CamKix is a good option for iPhones.

What is the best smartphone tripod for vlogging

While there are several good vlogging tripods, Joby GripTight PRO TelePod tops our list when it comes to making vlogs.